A cookie is information stored on your computer by a website you visit. Cookies often store your settings for a website, such as your preferred language or location. This allows the site to present you with information customized to fit your needs. As per the GDPR law, companies need to get your explicit approval to collect your data. Some of these cookies are ‘strictly necessary’ to provide the basic functions of the website and can not be turned off, while others if present, have the option of being turned off. Learn more about our Privacy and Cookie policies. These can be managed also from our cookie policy page.

IE10 and below are not supported.

Artist on the Ridge: Jeremy Metz 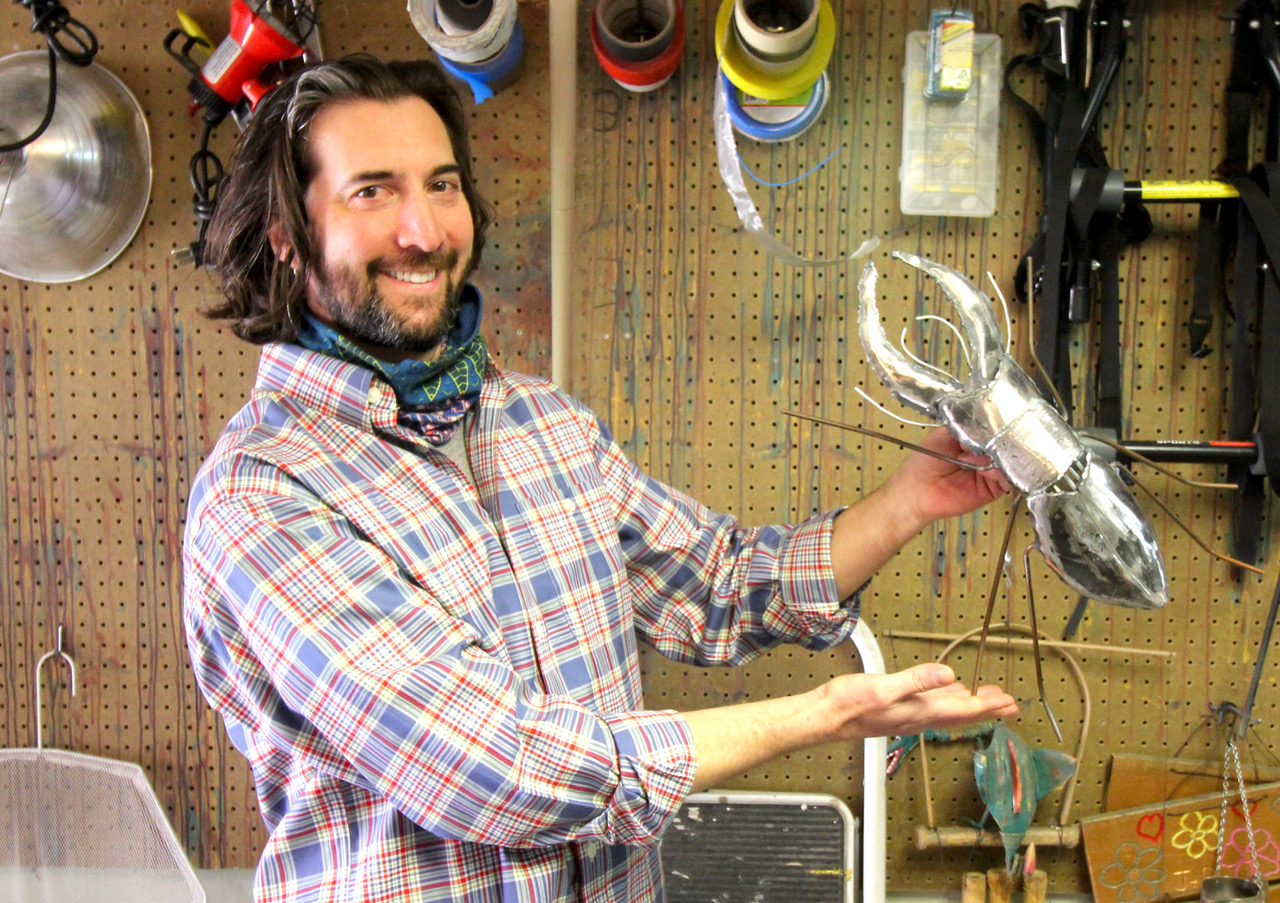 By Ken Lutes (Courtesy of the Neighborhood Gazette)

“I don’t know where the idea came from, or why. I just wanted to make a lamp,” said artist Jeremy Metz, who designs and creates floor and table lamps from materials commonly used in the electrical industry. In addition to the lamps, he creates metal bugs such as stag beetles or dragon flies – or the kind you might have strange dreams about.

“I know it sounds really corny to say this,” Metz said, “but I woke up from a dream about a desk with a desk blotter on top of it and a little, shiny metal beetle crawling up over it. When I woke up, I thought, I bet I could make that happen.”

The pandemic kept Metz from working his normal job on a regular basis this past year, but that has allowed him time to work on his art. His wife, Pam, encouraged him to do more with his art during this time. He maintains a downstairs nook at Found Antique & Artisan Mall (foundantique.com) – something he says he wouldn’t have opened otherwise.

“I have sold lamps and a lot of bugs from there – they’re very popular.” He takes custom orders as well, and his table lamps may be seen in the bar at Clancy’s Irish Pub.

Metz didn’t start off wanting to be a sculptor of metal art. A year at Metropolitan State College and one at Colorado State University in Fort Collins taught him about expensive student loans, so he took a break and worked odd jobs for two years before settling into a music program at the University of Colorado at Denver, where in 2003 he earned a bachelor’s in music industries studies.

“It was kind of a general music education, where you a learn a little about the business, and a little about music theory,” Metz said. He focused on the music engineering classes, and “even got to use a 1968 Neve (sound mixing) board used by the Beatles to record Abbey Road.”

Metz says that through the course of that education, he began to realize that making a career in the music industry required more “hustle to try to find a studio to get a job in” than he was willing to make.

“I love music, I love to listen to it, I like to play it a little bit. But I’ve always been comfortable with Colorado, and I didn’t want to move to Nashville or Los Angeles.”

That’s when his brother, an electrician at the time, suggested he become one, too.

“He told me, ‘I know it’s not music, but it’ll pay your student loans.’ I had never been in a skilled trade before. I like to work with my hands and be on my feet and solve problems, and it’s been a good trade for me.”

Metz has always made pencil drawings, and he’s played the guitar since he was 16, but he says he was “never really good at those things.” He believes the ideas for the lamps and bugs might never have happened had he not become an electrician and more of a “handy man.”

The idea for making lamps developed over time, as he worked with the materials he used as an electrician.

“About 10 years ago, I wanted to try to make a lamp out of the parts I was using and I thought if I could get a cord to run through (a length of steel conduit) and into the wall, I could make a pretty cool looking lamp.”

He uses two conduit benders – one for three-quarter-inch conduit for the floor lamps, and one to shape half-inch tubing for the table lamps – to bend the lengths “into a pleasing shape.” Fittings connect the conduit to a weather-proof electrical switch box. A pendant kit that has a lightbulb socket on one end and a plug-in on the other runs through the conduit and box. It sounds like an industrial process, but Metz’s designs yield an artistic, pleasing-to-the-eye effect. To that, he adds, “You also have to do it in a way that’s safe and that works.”

Creating the beetles – Metz refers to them as “bugs” – required learning how to weld together pieces cut from steel sheets (body and wings) and metal rods (legs). He buys recycled steel sheets by the pound.

“I’ll come out to the shop and cut out all the shapes on one day, then the next day I’ll bend them into a three-dimensional form that looks good; then I’ll start the welding process.”

He then uses a cutting wheel on an angle grinder to add texture to them and a sander to make them shine.

“I like to go into the garage, close the door, and turn on the radio, and just be in my own space, my own world for a few hours. It’s therapeutic. It’s nice when you start to see a direction for yourself that’s geared toward how your mind works.

“I hope kids will recognize the different bugs and say, ‘That’s a stag beetle, and that’s a dragon fly.’ Maybe that’ll help them to become more interested in insects or sculpture. People might be surprised how easily you can get into something like this without having a background in it – like with my welding set-up. I just went out and bought it, and nobody stopped me.”

For more about Metz’s art – and a weekly podcast produced with his wife – visit metalart303.wordpress.com.